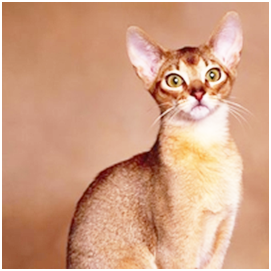 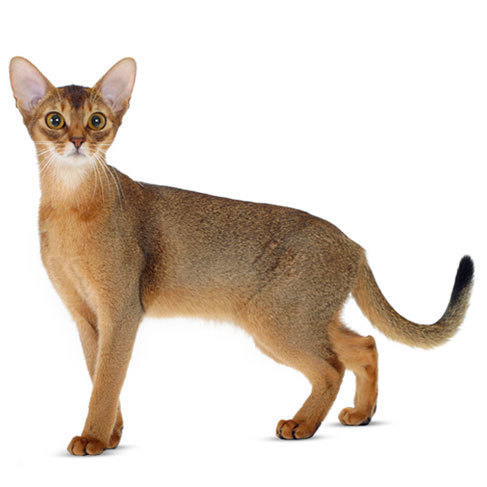 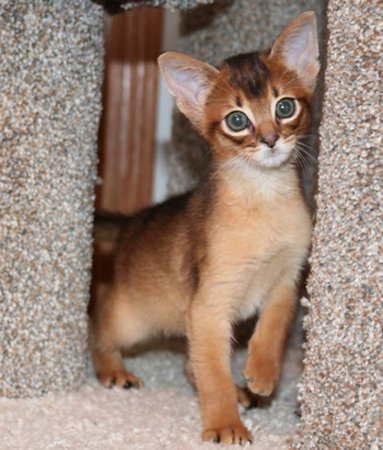 The Abyssinian cat hails from the region in and around Ethopia and at least one was carried out and brought to the United Kingdom by a soldier back in 1868.

Abyssinians are a popular breed thanks in large part to their unusual intelligence and generally extroverted, playful and willful personalities.

The Abyssinian cat is quiet, intelligent and curious and is said to enjoy human company and likes to become attached to its family.   They enjoy space and are excellent climbers and love to find high spaces to reach up into and relax ~ we’re talking ‘trees’ here.  Abyssinian cats are playful but tempered with some sense so are not too reckless!

Abyssinians are a popular breed due I large part for their unusual intelligence and generally extroverted, playful, willful personalities.

Their dog-like characteristics are noted because of their need for affection and desire for interaction over aloofness.

Today…Abyssinian cats are one of the most popular short haired breeds sought after in the USA & Canada.

Although the Abyssinian is one of the oldest known breeds, there continues to be speculation and controversy concerning it’s history ~ which basically is still shrouded in mystery.

It was thought that the first cat was brought to England by a British soldier in 1868 after the English army had fought in Abyssinia (present day Ethiopia). It is believed that this cat, named “Zula”, is the foundation of the Abyssinian line.

The early Abyssinian cats were crossed with British Shorthairs, and later with oriental breeds.  Long-haired Abyssinian kittens have been found in litters for many years, and since the 1970s they have been developed as a separate breed called the ‘Somali’.

It was not until the 1930s that Abyssinians were exported from England.

These cats form the basis of the modern day Abyssininan cats we see here in the USA & Canada.

World War II almost wiped out the Abyssinian cat population in the UK and a concerted effort was made to import Abyssinians from the US to bolster the breeding population.

Since then, Abyssinian populations have grown rapidly ~ hence why they are now considered one of the most popular cat breeds in the world.

Abyssinians are known as the “Clowns of the Cat Kingdom”.

The Abyssinian has a slender build with long slender legs and a long tapering tail.
Their coat is short, fine, and lies close against their bodies.  The original color and the most common one is known as ruddy. The coat has a warm, reddish-brown base, with black ticking. In addition to the most common color ruddy, Abyssinians can also come in cinnamon, fawn, and blue.