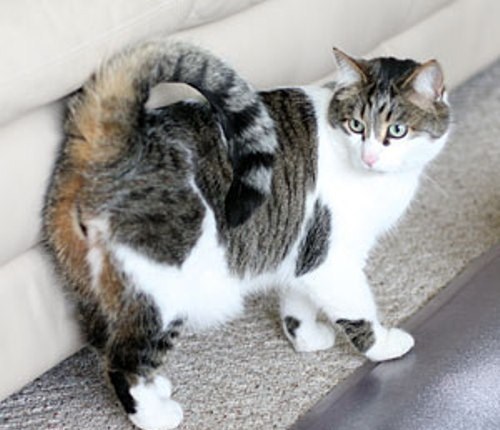 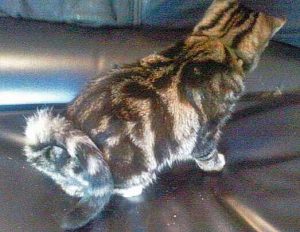 Ringtails have a wonderful personality and can communicate with  their owners by talking back when spoken to. Ringtail cats are very affectionate, outgoing, friendly, and loyal, though they may be a little shy around strangers. They are great with children and often develop a really strong attachment to one particular member of the family.

This breed is still considered experimental because it is so new, but it is already really popular because of its attractive appearance and wonderful personality. These cats do well with other animals, making them great family pets. They are also curious and love to explore. Because they enjoy climbing, playing, and exploring, owners should have plenty of toys and cat trees for them to keep busy throughout the day.

​The Ringtail Cat is a fairly new experimental breed that started with a rescued cat named Solomon in 1998. When Susan Manley found him, he was a 2-day-old kitten who needed to be bottle-fed in order to survive. As he grew and reached the age of 4 weeks, she noticed that he had a unique tail unique tail that would curl over his back. After having Solomon examined by a veterinarian, it was determined that there was no underlying medical issue or deformity that caused his tail to curl. The cat seemed perfectly comfortable and content, holding his tail curled over his back when relaxed.

​In 1999, Susan started a breeding program whose goal was to reproduce this curled tail, which she had also noted in other feral cats throughout the northern California neighbourhood where she lived. A few breeders began working with Susan by 2005. The cats with curled tails were bred with purebreds and domestic shorthair cats. And in that same year, The International Cat Association, also known as TICA, gave this new breed “Registration Only” status.

Ringtails are quite large, long, and muscular. They have a strong, flexible, and long back, as well as silky soft fur. They come in a variety of eye colours. They also feature medium-sized paws that have long, webbed toes, which can spread wide when playing and climbing.

When born, the tail will be straight, but as the cat grows, the tail will begin to smoothly curl over the back. The tail, which is muscular and broad, especially at the base, features well-developed bones that aren’t fused together, so it has complete range of motion and can even be held straight if the cat wants to uncurl it. Owners of Ringtails also notice that these cats use their tails more than other cats do. For example, in addition to being utilized for balance, the tail can be used to slow them down when descending from a cat tree, or to slow down during a high-speed chase. The Ringtail cat is bred to exhibit all patterns and colours.

​Caring for your Ringtail

​This breed can feature a coat that is short or medium in length. Cats with medium-length coats would require regular grooming, probably around two times a week. Overall, though, this breed doesn’t shed too much, so grooming once a week can help keep the fur soft, shiny, and healthy.