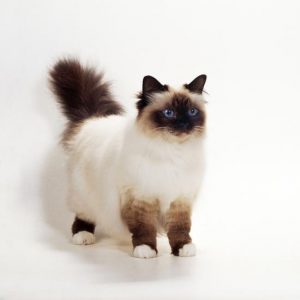 While there is no clear record of the origin of Birman cats, one pair was taken to France around 1919, from which the breed became established in the western world. However, Birman cats were almost wiped out as a breed during World War II and were heavily outcrossed with long-hair breeds (mainly Persians) and also Siamese lines to rebuild the breed. By the early 1950s, pure Birman cat litters were once again being produced. The restored breed was recognised in Britain in 1965.

Birman cats are easy-going, affectionate and well-mannered cats with a tolerant, kind and loving nature. They are people-oriented and devoted to their preferred people. They will follow them around the house, cuddle in their lap and become a major part of their daily routine.

Even though Birman cats are not as active as some other breeds, they cannot be considered lap cats. They possess a cheerful and playful nature and will enjoy a good game of fetch with their favorite toy or a game of hide-and-seek with their favorite humans. Highly intelligent, Birman cats quickly learn to respond to the calling of their names, even though sometimes they will deliberately ignore it. Although they are not as talkative as the Siamese, they do enjoy a good conversation with their human family and will communicate their thoughts with their melodious and soft voices.

Birman cats get on well with other animals and can easily adopt to the apartment life, however they hate being left alone all day. They are also excellent trainers, especially when it comes to their human family. With a meaningful meow, a tilt of those dark ears and a direct blue-eyed stare, they will clearly communicate their wishes to their human servants. After all, for centuries they were worshiped as sacred cats.

Its believed the Birman cats were the pets of the Kittah priests of Myanmar (Burma) and guardians of the temple of Lao-Tsun. Their original colors were pretty different, actually they had yellow eyes and white fur.   On the other hand, the golden goddess of the temple had deep blue eyes.

The head priest of the temple had as companion a beautiful cat named Sinh. One day the temple was attacked and the head priest was killed. At the moment of his death, Sinh placed his feet on his master and faced the goddess. The cat’s white fur took on a golden cast, his eyes turned as blue as the eyes of the goddess and his paws, legs and tail took the color of earth. However, his paws, where they touched the priest, remained white as a symbol of purity. All the other temple cats became similarly colored.    Seven days later, Sinh died, taking the soul of his master to paradise.

However, the first historical facts take as back to 1919, when two Birman cats were send to France as a gift to Major Gordon Russell. The Major, who happened to be in the Far East during some tribal uprisings, had helped the Buddhist priests escape from Tibet. They, in order to show him their gratitude, sent him the two Birman cats. Later on the two cats mated and that is how the breed started to expand in Europe.

In 1926 Birman cats breed was official registered in France, in 1966 in Great Britain and a year later in the States.

The special feature of Birman cats is their white feet, called “gloves”, on both front and hind feet. These gloves must be absolutely pure white. They should stop at the articulation or at the transition of toes to metacarpals, over which they should not extend. Slightly longer white gloves on the hind feet can be tolerated. On the back of the hind feet the white gloves end in points. The ideal “gauntlets” end in inverted “V’s” and extend 1/2 to 3/4 of the way up the hock. Lower or higher gauntlets are acceptable but should not go beyond the hock.

It is important that the gloves are equally long and show a symmetry of white, on either the two front or two hind feet, or even better, on all four feet.

The breed’s coat varies from long to semi-long: short on the face, gradually growing longer on the cheeks to a full frill, long on the back and the flanks. It has a silky texture and bears very little undercoat.

Birman cats are generally healthy cats, with a lifespan of 13-15 years. They are not predisposed to hereditary diseases.