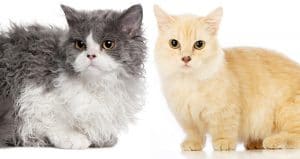 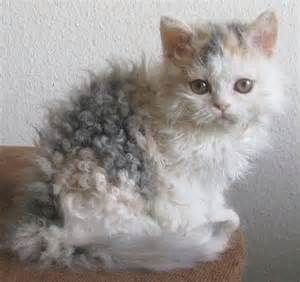 They are often a social breed, which love company, making them great pets. They love physical contact and petting.

Lambkin cats are not too high maintenance. The level of grooming they need generally varies depending on whether they are short or long haired, but they will need, as any other cat, a basic level of maintenance and regular health checks.

Because the Lambkin is a cross-breed it is, again, important for us to look at the personalities of its parent breeds.

The Lambkin, which is also referred to as the Nanus Rex, is considered one of the world’s rarest cat breeds, thanks to the fact that it is such a new breed. But even though this is a newer breed, the exact dates for its origins are not entirely clear. It is believed that this breed was created in 1987 or 1991 by Terri Harris, who was an American breeder that experimented with breeding a Selkirk Rex and a Munchkin. Her goal was to create a new cat who would be short but would also feature the unique coat of the Selkirk Rex, and that is what she got.

Because this feline is a crossbreed and it involves the Munchkin, it is one of several dwarf breeds. As a result, there is some controversy surrounding the Lambkin, whose small stature is the result of a genetic mutation. If you are hoping to introduce a Lambkin into your household, seeking out a reputable breeder will be important, as doing so could reduce the odds of your kitty having any health issues related to dwarfism.

The Lambkin, which is also referred to as the Nanus Rex, is considered one of the world’s rarest cat breeds, thanks to the fact that it is such a new breed.

The Lambkin features a unique coat that is described as plush and curly. It can even be compared to the coat of a little lamb. But when you pet these cats, you will immediately notice just how soft the coat is, even though the fur looks a lot like a wool coat.

The Lambkin breed come in a wide range of colors. In fact, you can find these cats in just about every color and pattern for domesticated cat breeds.