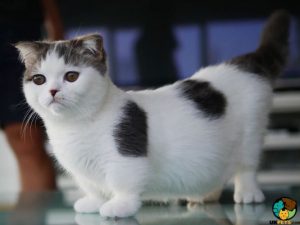 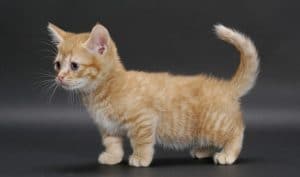 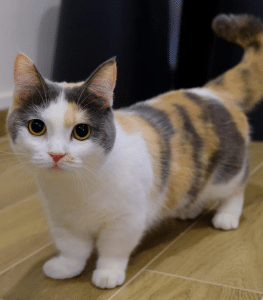 Munchkins love to play with dogs, other pets and children. Their short legs actually give them an advantage, as it allows them to make tight maneuvers larger animals can’t.   Active, outgoing, and sweet-looking, this kitty is an adorable addition to families with children or other pets.

Munchkin Cats are described as being active and outgoing and  love to playing with humans and other household pets.  Their friendliness makes them tolerant of being handled. When not moving about, it is likely to stand on its rear legs like a rabbit and observe anything that catches its fancy.

They are described as being  “like a ferret” on the ground and can climb up to high spots with ease. When not moving about, it is likely to stand on its rear legs like a rabbit and observe anything that catches its fancy.

Further, it forms strong bonds with its owners and is likely to experience separation anxiety. As such, it should not be left alone for long periods. It is also known to follow its humans around, keen on knowing what is going on.

An intelligent kitty, the Munchkin Cat likes to engage in interactive play. It can even figure out ways to get to a high place. It should be mentally stimulated to keep it balanced. Puzzle toys and teaching tricks help do this.

The first reports of these Munchkin cats with a genetic mutation causing short legs date back to the 1930s and 40s, but there was no trace of Munchkins throughout World War II. They resurfaced in the 1950s and 70s before being officially established as a breed in 1983.

These Short-legged cats have been around for some time now. However, they seemed to have disappeared during World War II. They re-emerged decades later in Russia (1956) and in the US (1970s). It was only in the 1980s that feline fanciers actively bred what they also call the “kangaroo cat.”

The founding cat of today’s Munchkin is a stray, short-legged, pregnant cat called Blackberry from Louisiana, USA. It gave birth to a litter of similarly stubby-legged kitties in 1983 after it was taken in by Sandra Hockenedel.

One of its male kittens was given to her friend Kay LaFrance, who allowed it to roam freely outdoors. Soon enough, her area had more sightings of short-legged kitties. This phenomenon prompted the ladies to consider developing what appeared to be a new breed.

In 1991, the Munchkin was finally presented to the public through a televised cat show. Its development was later taken seriously by Cat Breed Associations to ensure the diminutive felines are bred responsibly.

Genetic studies revealed that the unusually short limbs were due to a natural genetic mutation. In fact, the gene responsible for the Munchkin’s short legs is the same one found in Dachshund, Basset Hound, and Welsh Corgi. It was also determined that breeding a Munchkin Cat to another can lead to the death of a quarter of the resulting litter. As such, this feline is usually bred with longer-legged breeds.

The short-legged Munchkin Cat is named after the diminutive characters in “The Wizard of Oz.” But don’t let its floor-hugging height fool you – this feline can move very fast on its four feet. Active, outgoing, and sweet-looking, this kitty is an adorable addition to families with children or other pets.

With their short legs and a long body Munchkins look like the feline version of a Corgi or Dachshund.

They have walnut-shaped eyes, triangular ears and can have either short or long coats.

The Munchkin is maintained using an outcross program, which breeds other domestic cats with Munchkins to ensure gene diversity. As a result, these felines can come in an array of different colors and patterns.