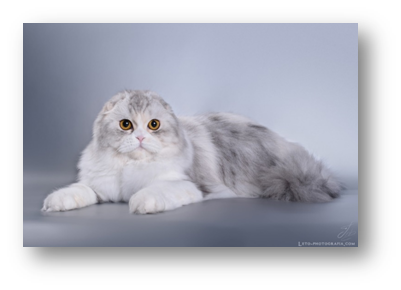 This unusual breed of cat originated in Scotland in the 1960’s.  The first known Scottish Fold cat was named Susie. She was a white barn cat whose ears were not upright like a normal cat. Instead they were tucked down and forward on her head. Susie also had big wide eyes and soft plush fur, and so become the first cat to be bred to create the Scottish Fold breed.

When these cats are bred properly, they should have a rounded head with tightly folded ears, large wide eyes and a constant look of either surprise or terror. They are usually seen as quite stocky and with a definite muscular pattern showing in their front legs and chest area. However, it is interesting to note the larger the cat’s jowls are, the tighter their ears are, as well as the wider their eyes are. This all amounts to a beautiful cat that proves to be a champion in the show ring.

The Scottish Fold is not a vocal cat, unless they are a female cat in heat! The temperament of a Scottish Fold cat is extremely mellow and laid back. They also love to be held and cuddled close to their owner’s chest. This is not a bad thing, considering that their coat is so soft, almost like a rabbit’s fur in both density and silkiness, that every Scottish Fold owner will want to constantly cuddle with their cat.

Most Scottish Fold cats that have been properly bred have an average lifespan of approximately 15 years. However, they can live much longer than that as long as they are given good health care.

No matter what cat breed you decide on, make sure to have some fun toys when they arrive in their new home!