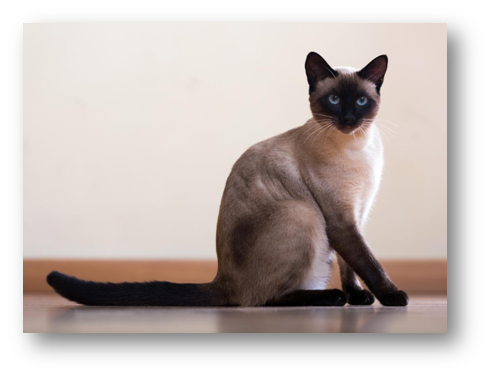 The pointed cat known in the West as “Siamese cat” is one of several breeds of cats from Siam (now called Thailand) described and illustrated in manuscripts of the 18th century, called “Tamra Maew” (Cat Poems). However, apart from these poems, there is no clear record of Siamese cats as a breed until late 1800s.

In 1884 the departing British Consul-General Gould was given a pair of Siamese cats by the Siamese king as a farewell gift. The gift was considered a great honor since the cats came from those bred in the palace by the royal family. The General brought the two cats, Pho and Mia, back to Britain as a gift for his sister, Lilian Jane Veley. The descendants of these cats, ‘Duen Ngai’, born March 1885 and ‘Kalohom’ and ‘Khromata’, born July 1885, were exhibited by Mrs. Velvey at the 17th Crystal Palace Show in October 1885. In 1886, another pair of Siamese cats and two kittens were imported by a Mrs. Vyvyan and her sister in Britain. The Siamese cats were so extraordinary that they captured immediate attention and in 1902 England founded its first Siamese cat fancier’s club.

Regarding USA, in 1878, President Rutherford B. Hayes received “Siam”, a gift from the American Consul in Bangkok. This cat was the first documented Siamese to reach the United States, and predates the Siamese’s arrival to the UK by 6 years. In April 1909, The Siamese Cat Society of America was founded and the first standard for the Siamese Cat was approved.

During the 1950s and 1960s the breed’s popularity reached its peak and Siam cats appeared in movies or animations such as ‘Bell, Book and Candle’, ‘That Darn Cat’, ‘Incredible Journey’, and ‘Lady and the Tramp’, making the Siamese cats breed even more famous.

Though there are many different breeds of cats, they are really unimportant to a great number of cat owners. Most of the time, owners look for personality and appearance over a specific breed. However, one breed of cat, the Siamese, has remained a very popular and much sought after breed of cat for many feline lovers.

The Siamese Cat is known as being a very regal cat throughout history. Even today, it maintains an elegant and sleek form, and remains the most popular of all pedigreed cats. The Siamese Cat comes in a variety of different colors. Most of the time, the body is one color while the outer “points” are another color. Because of this variation, the colors of a Siamese Cat are commonly referred to as Red Point, Blue Point, and so on. The Siamese Cat is most commonly a light color, often just a few shades darker than white, with darker points.

Today, the Siamese Cat is loved as being one of the more social breeds of cats. While many cats are quite content to spend a great deal of their time in solitude, the Siamese Cat typically appreciates spending time with its family, as well as other people. The Siamese Cat also has a very distinct meow, and they are more vocal than many cats. The meow of a Siamese Cat becomes very intense if it is distressed, or desires attention. Additionally, the Siamese Cat often lives for over twenty years, truly becoming a valued member of any family.

Siamese cats lifespan is 8-12 years. They do not have particular health issues. However, there are few records of breed-specific diseases:

Siamese Cats have a very distinct head, with unique features. Traditionally, the head was very angular, and triangle in shape. The breed maintains that head shape even today. Additionally, the ears are very large, and also pointed like a triangle. In the past, Siamese Cats were known for their crossed eyes. Luckily, selective breeding has essentially prevented that trait from affecting today’s Siamese Cats. Nevertheless, the Siamese Cat still has very distinct eyes, always in a bright shade of blue.