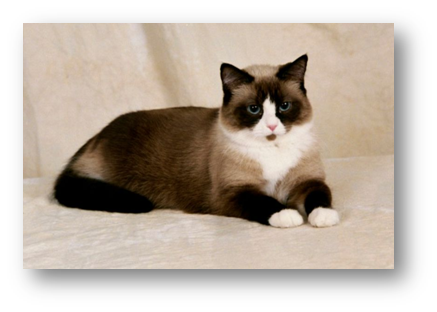 A mix of Siamese and American Shorthair breeds, the Snowshoe cat originated in the United States during the 1960s.  The “Snowshoe” name comes from their characteristic white paws.

The Snowshoe enjoys being an active member of the house.  Lively and inquisitive, it is not unusual to find a Snowshoe perched on top of the refrigerator surveying the scene.  Clever and a bit mischievous, Snowshoes learn to open doors and can be trained to run feline agility courses.

They love companionship and will seek affection from their family or other pets in the house.  Snowshoes are also vocal and are known to have “conversations” with their owners.

The Snowshoe cat has very distinct personalities and is normally great fun to live with; whilst they may be occasionally bossy they are also the perfect companion. You can expect your Snowshoe to be intelligent, active and extremely affectionate. A Snowshoe is known to choose her favourite person in the family and remain loyal to them.

Due to their high levels of intellect they are known to learn how to open doors and even perform tricks – they love to walk on a lead and play fetch. In fact, they even like a bit of water sports so will always be keen to play in any running water. This is a very active cat, one which will often be found sat on the top of a bookcase watching everything that is going on.

Snowshoe cats have been in the media since the launch of the Grumpy Cat and his rise to fame back in 2013. However, the scowling face and sad eyes of this cat is far from the true personality of a gorgeous Snowshoe cat.

The Snowshoe cat was originally named for their pretty white paws and dazzling appearance – originating as a mix of Siamese and American Shorthair they have now come into their own. The Snowshoe cats have an individual personality, with their high pitched purr and affectionate nature; they are always sweet and lovely to be around.

The appearance of the Snowshoe cat we see today actually comes from the Victorian -era where we can find photographic evidence of Siamese cats with white paws. However, the breed we know and love today wasn’t actually born until the mid20th century.

The Snowshoe cat came around due to an American woman named Dorothy Hinds-Daugherty; a Siamese cat breeder deciding she wanted to “create” a Siamese type cat with white paws – these she named Snowshoe cats. She began with three white pawed Siamese cats and bred them with a shorthaired cat with a black coat and white belly and so the Snowshoe cat was born.

The Snowshoe is a rare breed since it is difficult to breed cats with the distinct markings and patterns that conform well to the standard.  The breed is increasing throughout America but still uncommon elsewhere.  The Snowshoe cat is one of the more rare cats around today.

All Snowshoe kittens are born white and their unique color patterns appear between 1 to 3 weeks.  Known as “points”, these color patterns appear on their tail, legs, head and ears.  Snowshoes have captivating blue eyes and their short glossy coat comes in blue, seal, lilac and chocolate varieties.   The Snowshoe cat has four white paws, exactly symmetrical in size and shape, as though he has just walked through snow.

Despite the uniform paws, the Snowshoe cat can actually come in a variety of different colors. He has short hair, which eliminates the need for frequent grooming. Excluding the paw pattern, the Snowshoe cats are varied in terms of coat pattern as well.

Very much like their ancestor, the Siamese, the Snowshoe cat has very pointed features, with a light coloured body with the legs, ears and tail being the darker areas. However, the body is more rounded than the Siamese, with much shorter hair. A “V” shaped white marking will also be found between the eyes and over the muzzle. The four paws will be white to accentuate the darker coloured legs – the front paws are normally known as “mittens” with the back ones termed “boots”

The average size of a Snowshoe cat is between 9 and 12 pounds. Females are smaller weighing between 7 and 10 pounds.