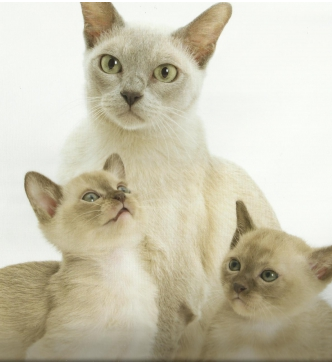 A dark brown cat, resembling a Siamese cat in shape, was first taken from the far east to California in the 1930s. As there were no other Burmese cats in America at the time, the ‘Wong Mau’ breed was mated with a Seal Point Siamese cat. Through selective breeding a new dark coated breed became known as the Burmese cat we know today. The Burmese cat was first recognized as a breed in American and came to Europe in the 1940s. Breeding programs have since developed a range of coat colors.

The Burmese cat is an extremely friendly and affectionate.  They have a history of needing a lot of attention to be happy. The Burmese cat breed is very demanding and Burmese cats will follow owners around the house crying for attention – they might even climb their owner’s leg begging to be picked up and cuddled!   As very vocal cats they will often greet owners when they return home or demand what they want and to join in with all activities. Loyal to their owners,~ they are sometimes known as the ‘dog cat’ as many are happy to play retrieve.

They are very intelligent and can work out problems such as opening doors are often successful escape artists!   This is a furry companion that loves to curl up in a warm lap and be petted, making them an ideal pet for families and singles alike.   In fact in some cat circles they are described as the “the ultimate companion cat”.

Appearance & They Come in 10 Colors

The Burmese cat is medium sized, with a rounded head and an elegant yet well-muscled body.

The breed is not as large and sturdy as the British Shorthair cat breed nor as slender and dainty as Siamese cats.

Their eyes are large and lustrous and may be any shade of yellow, often seeming to change in variations in light quality. The tail is straight and ends in a rounded paintbrush tip. The fine, short glossy coat is a distinctive feature of the Burmese cat and lies close to the body.

The Burmese cat comes in 10 colors but in all colors the underparts will be lighter than the back and the shading will be gradual.

Their coloring is usually a darker brown but they are bred in a variety of colors such as chocolate, lilac, blue, cream, red, and variations of lilac with shades of cream and red chocolate. Also blue, champagne, platinum, and sable.

The coats are typically short with a fine, glossy look that is characterized by a finish that is satiny.

Burmese are compact and their body is described as somewhat stocky, with males typically weighing about 3 lbs more than females. Even with their medium weight, due to their athleticism and muscle build.