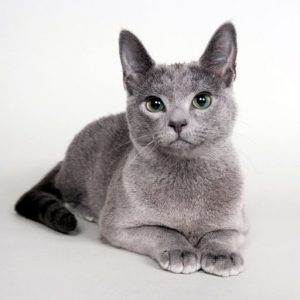 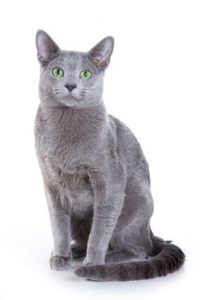 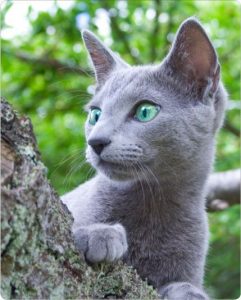 A naturally occurring breed, the Russian Blue is said to have first emerged in Arkhangelsk, a Russian port city facing the White Sea. Legend has it that this grey beauty thrived in the Russian wilderness and was hunted for its dense fur. Today, grey cats looking very similar to the Russian Blue are still present in the coldest areas of the country.

This feline was previously called “Archangel Cat” in a nod to its place of origin. Its luxurious coat and glittering green eyes reportedly drew the favour of the royalty and the wealthy. As such, it has become the pet of some Russian czars. After sailors took this cat on their voyages, the Russian Blue started arriving at other shores, particularly European ones.

It arrived in Great Britain in the 1860s. Then, in 1875, it was featured in one of the first cat shows in the world. The exhibition was held at the Crystal Palace in London, which marks the first time the breed was recorded outside its native country.

In 1912, the Russian Blue was entered in competition with other blue cat breeds. It was also the year when the Governing Council of the Cat Fancy (GCCF) gave it its own class and was named “Foreign Blue.” It was also known then as the Maltese. Later, in 1948, this breed’s name was changed to Russian Blue.

During World War II, the breed nearly died out as breeders were no longer unable to develop it further. After the war ended, cat fanciers from European countries, including Britain, attempted to save the breed. As there were very few Russian Blues, they crossed the feline with blue point Siamese and British Blue Shorthairs. Eventually, these crossbred traits were bred out of the Russian Blue as it rose in numbers. Its gene pool remains healthy.

The Russian Blue cat is arguably one of the most beautiful and coveted cats in the world. One of its biggest selling points is its impeccable appearance. Few cats rival the Russian Blue in beauty. However, it is not all beauty and no brains. The Russian Blue is loved equally for its pleasant personality, making it a much adored pet worldwide.

The Russian Blue is the blue-blooded feline in the cat world with its lean elegance and aristocratic look. It is considered as one of the most intelligent cat breeds in the world. It is affectionate and loyal to its owners and is known to follow them around the house.

In personality, the Russian Blue is thought to be very pleasant and friendly. They are shy in the beginning but warm up to their owners and become loving companions. Additionally, they are known for being very intelligent, and easily get along with kids and pets.

The Russian Blue cat’s personality should not be taken for granted however. It does not take kindly to loud environments or a lack of stability. But in a kind and loving household, the Russian Blue cat makes a great pet.