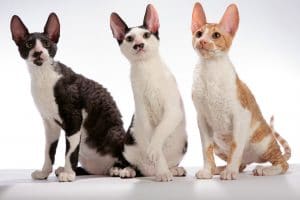 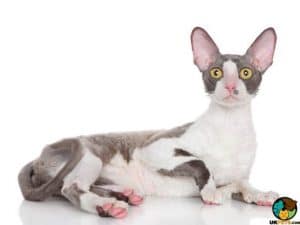 The Cornish Rex is one of the fastest of domestic felines and has been called the ‘Greyhound’ of cats.   Its elegant and sleek appearance as well as its galloping gait when it runs explains how it earned this nickname.

Active, playful, and affectionate, this kitty has dog-like traits and a mischievous streak. It is a wonderful addition to families seeking such a sociable and intelligent pet and can keep up with its boundless energy.

The Cornish Rex cat has a small, whippet-like body and loves to climb, leap and sprint. With kitten like antics that last a lifetime, this feline likes to be where the action is. The Cornish Rex is perfect for those who want a cat to participate in their family life.

The Cornish Rex may be reminiscent of the ancient Oriental breeds but it is actually a relatively new addition to the cat world.

In 1950 a British Shorthair owned by Cornwall, England resident Nina Ennismore gave birth to a litter of kittens. One was rather different than the rest as it was orange and white and, most importantly, curly. It later developed big ears and a body that resembled that of a Greyhound. The unusual kitty was named Kallibunker.

It was later determined by a geneticist that the kitten’s look was due to a genetic mutation. He recommended that Ennismore breed it with his mother to produce a litter of similar-looking kitties. Ennismore followed through and produced more curly-coated kittens. She named the new breed the Cornish Rex after the curly-haired Rex bunnies she bred and the place of origin.

It was later discovered by scientists that the curly coat was due to a recessive mutation of a gene responsible for hair development. As such, Cornish Rex kittens only emerge when two such cats that are very closely related are paired.

In the late 1960s the Cornish Rex was acknowledged by the Governing Council of the Cat Fancy (GCCF). It has since been outcrossed with other breeds, such as Russian Blue, Siamese, and Burmese, to improve its development and health.

On July 21, 1950, in Cornwall, England, Nina Ennismore discovered that her domestic British Shorthair, a tortoiseshell-and-white cat named “Serena,” had given birth to a cream-colored male with tight rows of tiny curls that looked like a miniature lamb. Ennismore named the kitten “Kallibunker” and the breed Rex as it resembled the wavy fur of the Astrex rabbits she raised and exhibited.